NBA Elite 11 (stylised as NBA ELITE 11) is a cancelled basketball video game by EA Sports. Originally titled NBA Live 11, it was to be the seventeenth game in EA Sports' NBA Live series and the first game to be released under the NBA Elite brand. On June 22nd 2010, Kevin Durant was announced as the cover player for NBA Elite 11; it is currently unknown whether Durant will appear on the cover of NBA Live 13 instead.

Following a poor reception to the demo which was released September 20th for PlayStation 3 and September 21st for Xbox 360, EA Sports announced that the game would be indefinitely delayed on September 27th 2010, just over a week before the game was set to be released on October 5th. On November 2nd 2010, EA Sports confirmed the cancellation of NBA Elite 11 but emphasised that the series would continue production at the EA Tiburon studios. The series was set to return with NBA Live 13 in the Fall of 2012, however the game was cancelled, and the series finally returned with NBA Live 14 in 2013.

A stripped down version of the game was released for the iPhone and iPod Touch. Three modes of NBA Jam were originally going to be included with NBA Elite 11, with rumours of a downloadable update to unlock other modes coming at a later date, but with the game's cancellation EA Sports elected to release NBA Jam as a standalone game on the Xbox 360 and PlayStation 3.

Producer blogs and tweets referred to NBA Live 11 following the release of NBA Live 10, initially confirming that the same naming convention used since NBA Live 06 would continue to be used. However, the July issue of the Official Xbox Magazine revealed that the series had been re-branded NBA Elite beginning with the 2010/2011 season release, making NBA Elite 11 the first title of a new brand. EA Sports officially confirmed the name change in a press release published on June 2nd 2010.

On January 22nd 2010, the NLSC submitted a PC Petition to EA Sports in the hopes of demonstrating the desire for a PC release of NBA Live. It does not appear as though EA Sports will be releasing a basketball game for the PC platform any time soon however, as their Third Quarter Fiscal Year 2010 Report did not list an upcoming PC release for a basketball title. NBA Elite 11 will only be available for the Xbox 360 and PlayStation 3.

NBA Elite 11 was to retain staples of the series such as Dynasty Mode, the FIBA teams (updated through the 2010 World Championships in Turkey), signature shots, playcalling, Online Team Play in the form of the EASBA and other familiar modes and gameplay elements. Dynamic DNA will also be featured as part of the ongoing partnership between EA Sports and Synergy Sports. It was also going to make use of a new control scheme that made greater use of the right analog stick and real-time physics.

As with EA Sports' other 2011 season releases, NBA Elite 11 would have utilised EA Sports Online Pass. New copies of the game were to ship with a working code to access all online content and game modes, however second hand games would have required a separate purchase of an Online Pass code at a cost of $10/800 Microsoft Points.

NBA Elite 11 would have made use of a new control scheme that made greater use of the right analog stick for player control, allowing the user to perform dribbling moves as well as attempt shots and make defensive plays. Users would have been able to opt for classic controls, though the new controls provided a deeper gameplay experience with increased control. Notably, turbo was removed from the controls with the intention of player speed and acceleration ratings providing differentiation between the speed at which different players could run and out-run opponents.

NBA Elite 11 was set to be the first basketball game to make use of real-time physics. This change was intended to eliminate the canned animations previously used for player interactions, as well as creating a more unique experience without canned highlight plays.

A report published by The Associated Press on June 8th 2010 hinted at a new announce team in NBA Elite 11 comprised of NBA on ESPN/ABC announcers Mike Breen, Jeff Van Gundy and Mark Jackson. On June 23rd 2010, producer Ryan Santos posted a Tweet mentioning that Jeff Van Gundy was recording commentary for the game. This was followed by an interview with producer Connor Dougan conducted by Hip Hop Gamer Show, in which the expanded use of the ESPN license and new three man commentary team of Breen, Jackson and Van Gundy were confirmed.

Game Informer Magazine was one of the first publications to make mention of Be a Pro in NBA Elite 11, suggesting the addition of a single player career mode. This was later revealed to be Become Legendary, a mode set to make its debut in NBA Elite 11. Similar to 2K's My Player Mode, it would allow users to create a player, take part in the Jordan Draft Showcase, get drafted and play through an NBA career completing various milestones.

Dynasty Mode was reported to have received some updates to simulated stats, trade logic and generated rookies in NBA Elite 11, however no new features besides further ESPN Integration were mentioned in snippets released before the game's cancellation.

On August 3rd 2010, it was revealed that NBA Elite 11 would ship with a code that would allow users to download three modes of NBA Jam, giving Xbox 360 and PlayStation 3 users the opportunity to play the Classic Campaign along with exhibition and online match-ups. Following NBA Elite 11's cancellation, EA Sports announced that NBA Jam would be a standalone release.

The demo for NBA Elite 11 was very poorly received, with gamers citing difficulty and distaste with the new controls, awkward looking animations with the new physics, players taking off for dunks from the free throw line and several strange glitches (including Andrew Bynum getting stuck at midcourt with his arms outstretched, infamously dubbed the 'Jesus Glitch') as the most troubling issues. Several videos have been posted on YouTube highlighting the glitches and criticising the demo.

On September 27th, a week before the game was set to be released, EA Sports announced that NBA Elite 11 would be delayed indefinitely to give the development team time to iron out issues with the game. With the positive reception to NBA 2K11, users and members of the gaming media alike speculated that the game was likely to be cancelled. The decision to cancel NBA Elite 11 was officially confirmed on November 2nd 2010, though EA Sports has expressed a commitment to the series and intended to return with NBA Live 13 in 2012. However, following its cancellation on September 26th 2012, the series ultimately returned in 2013 with the release of NBA Live 14. The series is currently being developed by EA Tiburon, after being developed by EA Canada since NBA Live 95.

In the wake of the game's cancellation, a number of copies (mostly for the PlayStation 3) have made it into circulation and are considered rare collector's items. At one point, it was estimated that around 20-30 copies of the game had been sold online, with around 100 total in circulation. In August 2017, five copies of NBA Elite 11 - three for Xbox 360, two for PlayStation 3 - were offered as a lot on eBay for $30,000 US.

A stripped down version of NBA Elite 11 was made available for the iPhone and iPod Touch through iTunes. The game included all 30 NBA teams along with an 82 game season, exhibition play and a three point shootout. It also included several unlockable Legends and commentary from Mike Breen. An updated version was also released which included updated rosters (including the 2011 All-Star teams) and various fixes for gameplay and game modes.

As of December 2011, it is no longer available in the iTunes store.

NBA Elite 11 was to be the 2010 and first installment in the NBA Elite series (formerly NBA Live), developed and published by Electronic Arts. It featured current Oklahoma City Thunder forward Kevin Durant on its cover and had a release date of October 5, 2010.[1]

In this year of NBA Elite 11, a new Commentary team will take the place of Marv Albert and Steve Kerr. The ESPN crew of Mark Jackson, Jeff Van Gundy, and Mike Breen will be in the Booth in this year of Elite.[3]

On August 9, 2010, EA Sports unveiled Become Legendary Mode. It is a singleplayer career mode similar to EA Sports' NHL and FIFA Be a Pro Mode, and Madden's Superstar Mode. This is the first time a mode like this has been in an EA Sports basketball game.[4]

On August 3, 2010, EA announced that NBA Jam, which was originally announced to only be for the Nintendo Wii, would be released on NBA Elite 11 as a one-time code for the PlayStation 3 and Xbox 360. There are three modes that can be played using the code: Play Now, Classic Campaign, and Online.[5]

The developers of the Xbox 360 and PlayStation 3 versions aimed to completely change the game's control system, but were pressed for time with an eighteen month development cycle. A demo was released while the game was being finalized. The demo was plagued with glitches that were much publicized, including one involving a player freezing in the middle of the court, stuck in a T-pose (also called the crucifixion pose). Developers were aware of an animation bug, but intended to fix it before release. After internal review of the game, EA found the product to be unsatisfactory and canceled the game.[6][7] 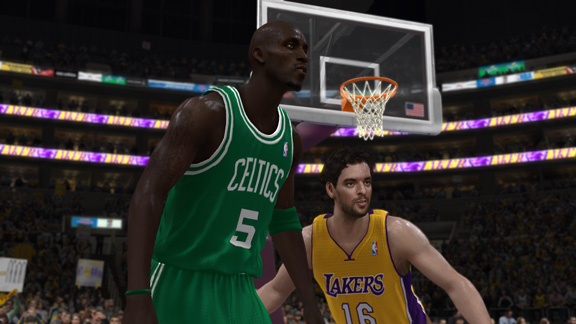 However, some copies, especially for the PS3, made it into circulation.

The iOS version is criticized for all the rookies having the same generic look. Download helper for chrome maccleversterling. most players are depicted as bald, regardless of how much hair they may have. In Season Mode, which runs the same schedule as the NBA, all the home and road games are reversed. (The Nets opened the actual season at home against the Pistons, but in the game, they open in Detroit)